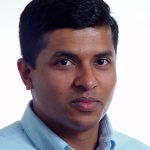 Gaurav Sharma (F) is with the University of Rochester (UR), Rochester, NY, where he is a Professor in the Departments of Electrical and Computer Engineering, Computer Science, and Biostatistics and Computational Biology, and a Distinguished Researcher in Center of Excellence in Data Science (CoE) at the Goergen Institute for Data Science. He served as the Director for the Center for Emerging and Innovative Sciences (CEIS) (2008-2010). From 1996 through 2003, he was with Xerox Research and Technology in Webster, NY first as a member of research and technology staff and then as a Principal Scientist and Project Leader. He received the Ph.D. in Electrical and Computer Engineering in 1996 from North Carolina State University (NCSU), Raleigh, NC, and Masters degrees in Applied Mathematics from NCSU (1995) and in Electrical Communication Engineering (1992) from the Indian Institute of Science (IISc), Bangalore, India. He received his bachelor of engineering degree in Electronics and Communication Engineering in 1990 from Indian Institute of Technology, Roorkee (formerly, Univ. of Roorkee).

Dr. Sharma is a Fellow of the IEEE (2013), a Fellow of SPIE — the international society for optics and photonics (2013), and a Fellow of the Society for Imaging Science and Technology (IS&T) (2013). He is also an elected member of Sigma Xi – the scientific research society (1997) and the Phi Kappa Phi (1994) and Pi Mu Epsilon (1995) honor societies. He received an IEEE Region I Technical Innovation Award in 2008 for “Contributions to the Theory and Practice of Color Imaging and Imaging Systems.” Dr. Sharma has been inducted into the NCSU Electrical and Computer Engineering Department Alumni Hall of Fame (2018) and awarded the M.N.S. Swamy and S.V.C. Aiya medals at IISc in 1992.

In the emerging world of artificial intelligence algorithms and analytics, curated and labeled data is often considered the “new oil.” However, extracting this “oil” is often expensive and fraught with difficulties. Specifically, generation of labeled data can be labor intensive and tedious. Crowd sourcing can distribute the labor and mitigate the cost and tedium for some application scenarios. However, for other applications, such as medicine, the requirement of specialized knowledge and skills can make crowd sourcing unviable and generation of labeled data is therefore both expensive and limited, in volume and accuracy, by the availability of physicians’ time. The problem is even more acute for tasks requiring sample level labeling of large, high-resolution spatio-temporal datasets, for example, for pixel-level labeling of images for medical image segmentation. In this talk, through case studies, we highlight examples where creative use of conventional machine learning, computer vision, and image processing techniques allows us to efficiently generate labeled data for new applications of deep learning. The examples particularly highlight that these conventional tools continue to be effective and useful and will therefore co-exist symbiotically with modern deep learning methodologies.